Home » NEWS » TYRESE SHARES A PRECIOUS MOMENT WITH HIS DAUGHTER

TYRESE SHARES A PRECIOUS MOMENT WITH HIS DAUGHTER 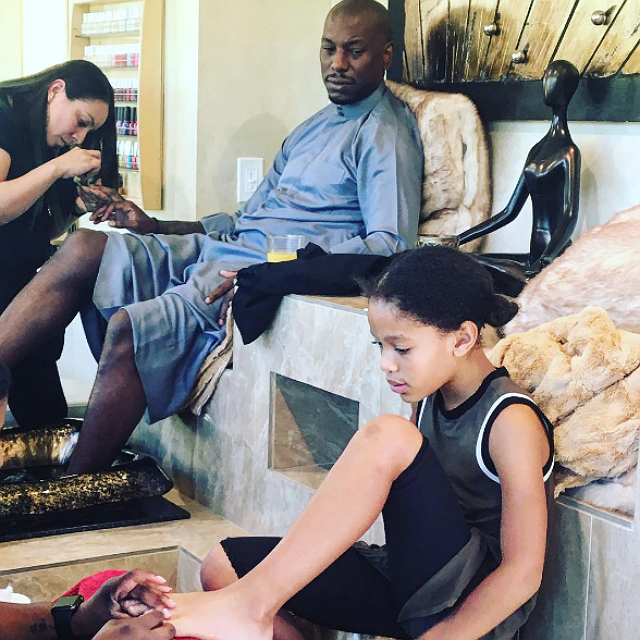 Tyrese Gibson often finds himself away from home, but he savors every moment spent with his daughter, Shayla, when he is not working. The all-around entertainer recently shared his heart about fatherhood and building wealth off of which his daughter can live for years to come.

“I didn’t know @revwon took this picture he caught me having a real father moment staring at my baby as she was picking a color for her feet,” Tyrese said of a photo that captured him and Shayla at the nail salon. The celebrity father was getting a mani-pedi while staring at his daughter who was also enjoying the day’s perks. “Pure, innocent and just happy to just be a little girl,” he said of his daughter’s mood.

Gibson went on to tell fans that he is working on several projects that will bring wealth to his family for many years to come. “I tell my daughter often that her father is a #SuperHero and sometimes I have to fly away and it may appear at times that people I barely know means more to me than her but they don’t – I’m only away at times because I HAVE to be,” he shared.

Tyrese further explained, “Most of your favorite entertainers don’t currently have sh**, let alone will they have anything to show for it when they pass on……… Most are out here creating these false images of financial security trying to sell #YOU on the fact that they got it but the real ones out here know they really don’t and honestly, that’s sad it actually breaks my #HEART cause some of these folks I’m describing are my friends.”

Such will not be Shayla’s fate if Tyrese has anything to say about it. “#ShaylaGibson I will protect you for the rest of my days on this earth,” the celebrity father told his daughter in his open letter. “I work as hard as I do so that you will never miss a meal and never be without and when ALL that I’m hustling for gets even more in place……. This I promise – We will have even more of our beautiful movement even more often.”

Shayla is Tyrese Gibson’s only child with ex-wife Norma Mitchell. She celebrated her ninth birthday on July 11, 2016.

WAKA FLOCKA FLAME AND THE FAMILY GIVE BACK FOR THE HOLIDAYS

WAKA FLOCKA FLAME AND THE FAMILY GIVE BACK FOR THE HOLIDAYS