Home » Gossip » ARE DOMINIQUE AND DONALD PENN HEADED FOR DIVORCE COURT? GET THE STORY INSIDE! 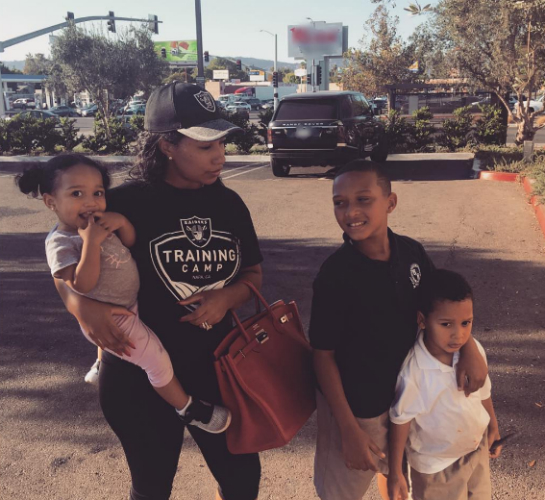 Are Dominique and Donald Penn headed for divorce court? Maybe so, maybe no. TMZ reports the celebrity mom filing for marriage dissolution from the NFL star last month.

“In court docs, obtained by TMZ Sports, Dominique — married to Donald since June 2012 — lists ‘irreconcilable differences’ as the reason for the split,” the media source reports. “In the docs — filed on October 20th — she asks for spousal support and joint custody of their 3 kids.”

Dominique laid everything bare a few weeks back when she revealed that her husband had cheated on her with reality star Camilla Poindexter and is more than likely the father of the ‘Bad Girls Club’ star’s 8-month-old daughter.

“My husband cheated on me with this hood rat,” Dominique told Instagram fans. “She knew he was married from jump!! He knew that he was married! They did this to my family!”

Although Dominique was furious, she vowed to stand behind her husband. “He has 4 kids now (paternity test pending) to worry about,” the star mom wrote. Still, “My husband married a strong woman, and even at his weakest points today, I encouraged him to go play [on Sunday].”

Dominique and Donald Penn have three kids together. Stay tuned to find out how things play out!

Bonus: Donald Penn gifted his wife with a Bentley on Tuesday that some media outlets are calling his “make-up” present to Dominique. Check it out!

HEIDI KLUM ON HER KIDS: 'I TELL THEM ABOUT THE CHILDREN THAT I SEE AT THE HOSPITAL'

SOLANGE KNOWLES TALKS 'A SEAT AT THE TABLE,' MOTHERHOOD AND MORE AT STANFORD UNIVERSITY EVENT

SOLANGE KNOWLES TALKS 'A SEAT AT THE TABLE,' MOTHERHOOD AND MORE AT STANFORD UNIVERSITY EVENT