Is Badu pregnant (with her fourth child) with musician Ishmael Butler of Shabazz Palaces? 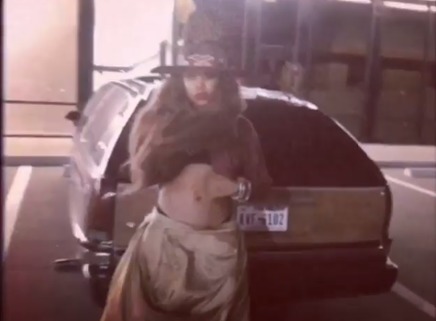 Fam, chill. Ain’t nobody shoot up the club, ok? Why I got to be pregnant every holiday season? ?just. Stop. Y’all trying to say I’m fat ? Y’all say this shit every fall. I just be a little hungrier than usual come late October…Now y’all got us in here arguing over baby names.

Is Erykah Badu pregnant by Ishmael Butler of Shabazz Palaces? That’s the question on everyone’s minds ever since the singer uploaded a new video to her Instagram page on Tuesday.

In the video from earlier today, Badu can be seen wearing an over-sized outfit while striking some poses in a parking lot. What’s interesting is that the musician stops to rub her belly not once, but twice. She captioned the video, “Ishhues wit trust.”

“You rubbed your belly 2x’s whats going on?” One fan asked.

“Wow, So is this indicative of you being pregnant by @shabazzpalaces ???”

One Fan who seems to have inside information says that not only is Erykah pregnant, but that she is expecting a baby with a member of hip-hop duo, Shabazz Palaces.

“Believe it. @shabazzpalaces got her pregnant but ain’t claiming the over baby he made out here.”

Ishmael Butler, who is a member of Shabazz Palaces, is the rumored baby’s father in question. Butler has a son named Jazz Butler from a previous relationship with Coko Clemons, the lead singer of SWV. Badu is mom to two daughters and a son.

Congrats to the couple if the rumors are true! Stay tuned for updates!

VIRAL KIDS: SKYE TURNER HAS THE VOICE OF A GIANT AND PATTI LABELLE AGREES!