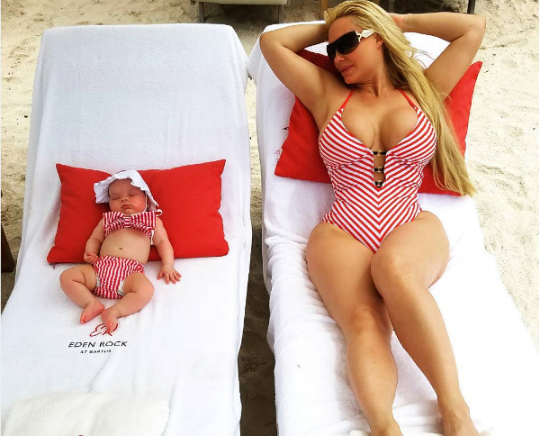 Like mother, like daughter! Coco Austin shared an adorable picture of her and her daughter, Chanel, wearing matching bathing suits.

The two were relaxing at the Eden Rock at St. Barths when the photo was taken. “Its been a wonderful trip,” Coco said. “Family time is priceless.” Austin was wearing a red-striped bathing suit that perfectly matched her daughter’s beach gear. The two even had the same pillows on which they relaxed. How precious!

Coco shared another picture of her and Chanel wearing polka-dotted bathing suits. The celebrity mom’s outfit was a light blue while Chanel’s was more on the side of navy blue. “It doesn’t get better than this,” Coco shared.

Austin’s post-pregnancy body looks amazing. The star’s stomach went back to its flat state just days after she gave birth to Chanel last year. “I was basically in shape before I got pregnant but during pregnancy I stopped my workout regimen at 4 months preggers and pretty much became a fruitarian after that,” Coco shared with Instagram fans earlier this year. The star also uploaded a picture of herself before and after giving birth. “I gained 13 pounds my whole pregnancy and now I way almost back to norm at 137 pounds,” she wrote just weeks after her daughter was born.

Chanel is Coco Austin’s only child with her husband, Ice T. She was born on November 28, 2015.