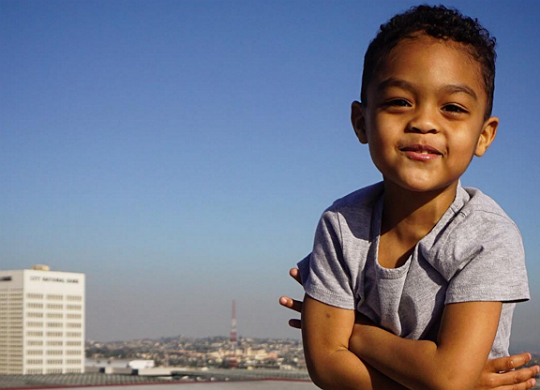 Curtis “50 Cent” Jackson is feeling the heat after implying that his youngest son, Sire, is his only child. The rapper took to Instagram on Friday to express happiness over fathering the toddler when a few fans criticized him for failing to recognize his oldest son, Marquise.

“God has away of putting people in your life that help you through. This is my little guy, he is all that matters,” Jackson captioned underneath a picture of Sire smiling while folding his arms. Many fans looked in adoration of the youngster but some scrutinized Curtis for not doting on Marquise.

One fan wrote, “Got two sons one for the show and one for the pettiness @50cent. I bet your grandma wouldn’t be proud of you being a jerk.” Another subscriber commented, “My home girl @janelleab_ recently produced a movie with @50cent oldest son in it and he is doing a great job, wait until the movie drops 50 gonna be sick to his stomach because he is doing a way better job in the movie than his actual dad and it’s full with well known actors.”

All of the backlash is the result of a comment that 50 Cent made on Marquise’s page earlier this week. The rapper’s son shared a picture of one of his shoes from his lucrative McFlys line and Fiddy commented on the post. “You will be 20 in a few months,” the rapper wrote. “I’m happy to see you in good spirits. You be strong out there on your own, boy. You are a grown man now.”

Marquise responded to his father’s remark by saying, “Didn’t think you knew how old I was. You missed a few birthdays. I’m happy to see you have kind words to say to me this time.”

Shaniqua Tompkins, Marquise’s mother, also had words. “You’re so miserable,” she exclaimed. “Go pick on them boys who put that hot led up in your a$%! Oh! I forgot. You like to pick on women and children.”

Marquise is 50 Cent’s only child with Shaniqua. Little Sire is the rapper’s son with Daphne Joy.

KRISTA CAMPBELL JOINS MOM, OPRAH AND OTHERS AT 'BLACK WOMEN IN HOLLYWOOD' LUNCHEON