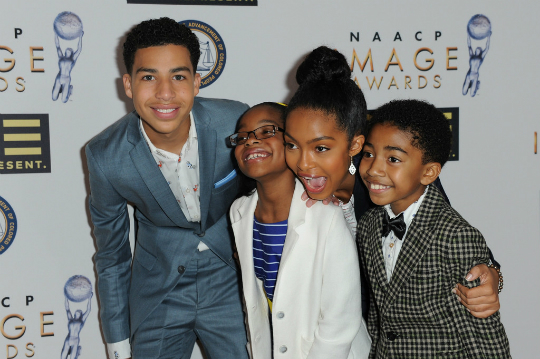 The young stars of the hit series ‘Black-ish’ were out in full force at the 47th annual NAACP Image Awards luncheon this past Saturday. Yara Shahidi, Marcus Scribner, Marsai Martin and Mile Brown took several pictures together on the red carpet before entering the Beverly Hilton to mingle with other celebrities.

Three out of four of the young stars – Marcus, Miles and Marsai – are up for the Outstanding Performance by a Youth Award at this year’s ceremony. All four of the kids do a superb job of bringing their characters to life on the show.

“Me and Andre Jr. are very similar in many ways,” Marcus said during one interview. “We both like video games, we’re both pretty nerdy. I would say. But then, at the same time, we’re very different. He has a different sense of style – even though we both carry the same level of swag.”

JEP AND JESSICA ROBERTSON SHARE DETAILS BEHIND THEIR ADOPTION