JEP AND JESSICA ROBERTSON SHARE DETAILS BEHIND THEIR ADOPTION 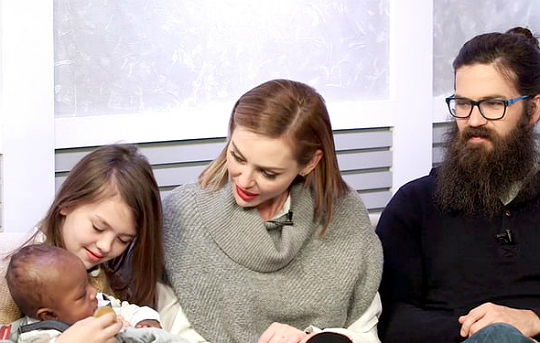 Jep and Jessica Robertson surprised a host of fans when they shared pictures of their newly adopted son, Jules August, a few days ago. Many were shocked to learn that the Robertsons added another little one to the family after welcoming their biological son, River, a few years ago.

“I had some health risks, so I wasn’t able to have another child, physically,” Jessica shares with Us Weekly. “It was on my heart so heavy,” she adds. “A year and a half ago, Jep came on board. He was like, ‘You know what, it’s a God thing. If it’s so heavy on your heart, this is something we need to do.'”

Jep also says, “We went to the adoption agency and we said, ‘We don’t care what race, what gender. We just want to have a baby, so whatever happens, happens.’ So we got us a little Gus.”

Although there were a number of challenges leading up to the Robertsons welcoming baby Gus into the family, Jessica tells media that she and Jep are happy to have pursued a closed adoption. “We just felt like for us, a closed adoption was the best thing that fit our family, and just the protection of our kids and even [Gus],” the reality star says. “[The process is] so worth it. We recommend it. It’s not the easiest journey, but it’s definitely worth it in the end.”

You can see baby Gus and other members of the Robertson family on the ‘Duck Dynasty’ spin-off, ‘Jep and Jessica: Growing the Dynasty,’ which airs on Wednesdays at 10/9c on A&E.