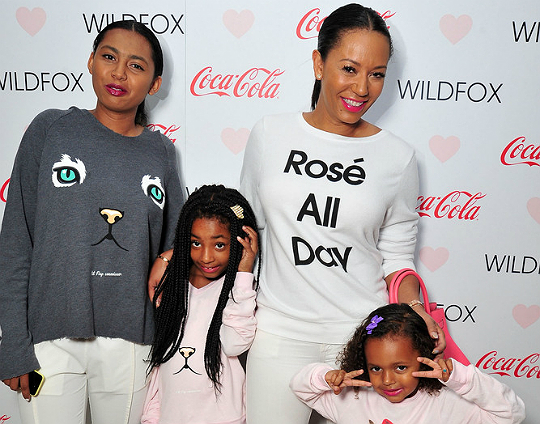 Melanie Brown, a.k.a. Mel B, and her daughters stopped by the launch party for the WILDFOX Loves Coca-Cola Capsule Collection in West Hollywood this past Thursday.

WILDFOX decided to partner with Coca-Cola after experiencing much success. This year is expected to be historic with a growth of 25 percent and more than $120 million in sales. The company’s collaboration with Coca-Cola features tanks, dresses, hoodies and jumpers that range from $58 to $128. Consumers will be able to purchase apparel online as well as at American Rag, Bloomingdale’s, Dash, Revolve and Nordstrom stores.

Melanie Brown is the proud mother of three kids. Madison is the singer’s youngest and the only child between her and husband Stephen Belafonte. Phoenix celebrated her sixteenth birthday earlier this year and has begun driving.