USHER AND HIS ‘DAPPER LADS’ 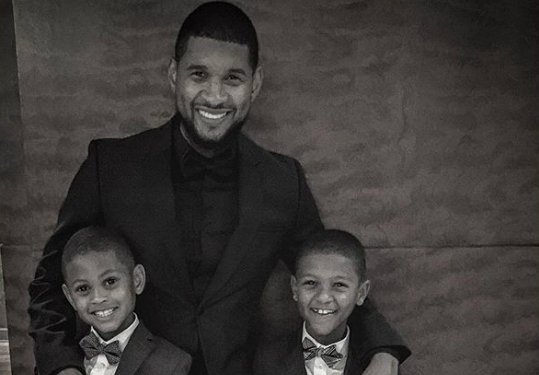 Looking Good! Usher V and Naviyd Raymond looked fabulous as ever in a recent picture post on Instagram. “Like father, like sons,” captioned dad Usher Raymond underneath the picture. The singer also shared a few photos of his sons onstage during rehearsal. “Front and center!! OK, here we go.”

Although he has thousands of fans calling his name during shows, Usher says that his youngest son, Naviyd, is not as impressed by his stardom. “He doesn’t care about what I do as much,” Usher shared with media last year. “He’s like, ‘I’m the star. Who are you? You sing?’ He told me the other day, he says, ‘You’re not a great singer.’”

While Naviyd is more critical of his dad’s performances, Usher V takes time to study his father’s every move onstage. “When seeing me perform on tour in the past … and most of the time it’s past his bedtime, but he’s just sitting there studying every move, every second, like laser focus. And then I’ll see him off by himself doing the moves.”

Usher V and Naviyd are Usher’s kids with ex-wife Tameka Raymond. The boys will celebrate their birthdays in coming weeks.