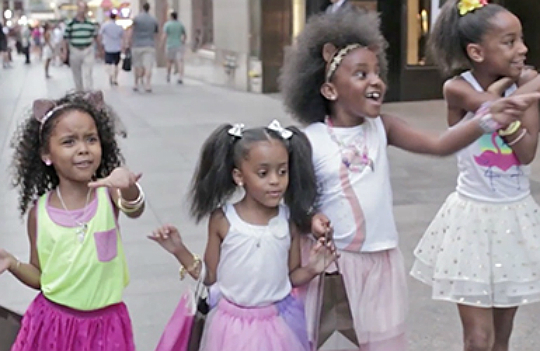 Heaven King is at it again with her latest dance video for ‘Hit The Quan.’ The 5-year-old shows major skill as she makes all of the right moves in the footage.

The video begins with Heaven and her friends walking out of the Dolce & Gabbana store in New York City. The girls have their trusted dog with them as they hit all of the luxury stores on fifth avenue. Heaven has a myriad of fans surrounding her as she dances while showing off her newly purchased gold shoes. The youngster does a superb job of depicting the lyrics in iHeart Memphis’ song.

The last time we saw Heaven was in the official music video for Silento’s ‘Watch Me (Whip/ Nae Nae).’ She was showcased while showing off her abilities to millions of Good Morning America viewers who got to see Silento’s video first after the artist rendered a live performance on the show.

‘Watch Me (Whip / Nae Nae)’ has peaked at number 11 on the Billboard 100 since its debut a few months ago. Watch Heaven King dance to iHeart Memphis’ ‘Hit The Quan’ below!