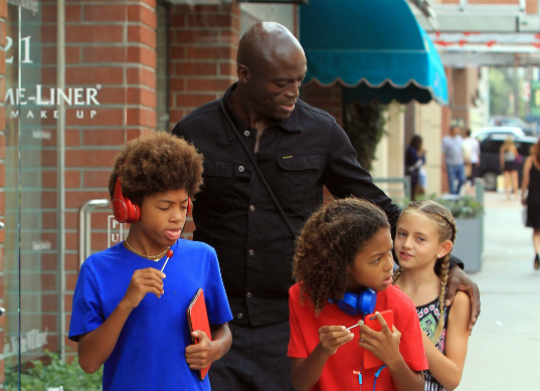 Seal was on daddy duty earlier this week as he took his sons and daughter to the doctor. The kids were all smiles while walking down the street in Beverly Hills, California.

Henry and Johan were color coordinated as one wore a red shirt that matched the iPad case of the other. Leni chose to be different by wearing a pretty patterned dress fit for summer.

Seal has expressed the joys of fatherhood during several interviews. He told media during one discussion that parenthood was “not a position that allows for many mistakes.” He added, “You pick up the slack. When somebody isn’t able to do something, you don’t wait to be asked.”

The R&B singer certainly does not wait to be asked to do anything that pertains to his kids while co-parenting with ex-wife Heidi Klum. Seal attends the youngsters’ soccer games and goes on various outings with the family.

Heidi and Seal have three kids together. Leni is Heidi’s daughter from a previous relationship whom Seal has counted as his own.

GILBERT ARENAS ON DRAYA MICHELE'S SON: 'I AM NOT THE FATHER'