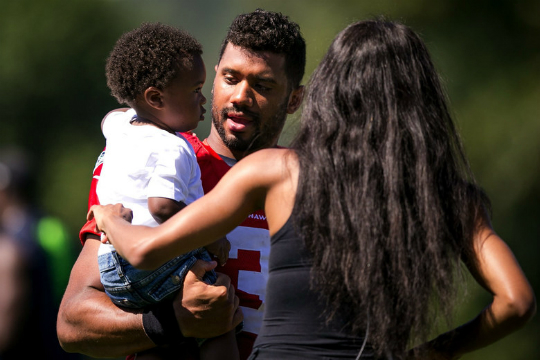 After being criticized by fans and celebrities, Ciara is speaking out on her son’s relationship with her boyfriend, Russell Wilson. The singer tells CBS News that scrutiny over her decision to allow little Future to bond with Russell is a double standard.

“It’s been very interesting to hear what a lot of guys have had to say,” shares the star. “I feel like in a sense it’s a bit of a double standard. At one point in time, when [Future and I] were together, I took care of his kids as well at a very young time in our relationship.”

Ciara further explains, “I was involved very early in the stage of us getting to know each other, and that’s been a big conversation. It’s kind of like, ‘What’s the difference here?’ I think that even for the men that were outspoken it’s like, ‘Wouldn’t you want someone to love on your child?'”

Although she generally doesn’t care how the public criticizes her, the singer tells media that recent condemnation over her life’s choices frustrate her because it involves her son. “People are going to talk about you all the time but when it comes to your child, it’s something I don’t take lightly,” says the star. “At the end of the day my son would be the one that’s affected the most out of this. And I think people have to think about that versus kind of like shouting out things.”

Future is Ciara’s only child with ex-boyfriend Nayvadius Cash, a.k.a. Future.