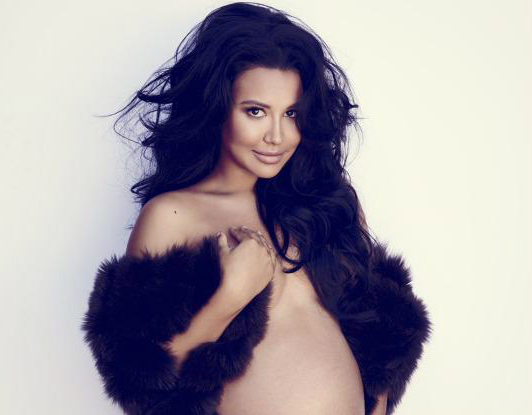 Kim Kardashian isn’t the only expectant mom living in the nude. Naya Rivera also posed half naked in a recent photo shoot conducted by Yahoo! News. The actress glowed as she held a hand over her bare breasts. Naya also had a stole and black shorts that concealed her most private parts.

Although many fans loved the edgy photo of Naya baring almost all, some critics accused the Glee star of copying Kim Kardashian-West who posted a selfie of herself completely naked earlier this week. “Media outlets know that when you give your photos and in interview to run a story you never get a choice as to when it runs,” tweeted Naya in response to the scrutiny. “Trying to make something out of nothing based on stupid assumptions is awful,” added the star.

Despite the criticism, Naya has maintained a positive attitude during her pregnancy. “The whole thing, really, has been surprising and new,” exclaimed the star during her interview with Yahoo!. “It’s such a change physically, mentally, and in terms of lifestyle, that I definitely didn’t know what to expect going into it.”

Among the many things to change has been the star’s diet. “I’ve been really conscious to make sure that, nutritionally, I’m giving the baby everything that it needs: vegetables and vitamins and all sorts of stuff,” shared Naya. “I’ve found, like, the best supplements and all of that… but I definitely have my vices, And it’s nice to be able to indulge in them for once. I’m paying the price, but it’s nice!”

Naya Rivera and her husband, Ryan Dorsey, are expecting their first child to arrive in coming weeks.

MONICA BROWN AND FAMILY HAVE A BLAST AT DISNEY WORLD

MONICA BROWN AND FAMILY HAVE A BLAST AT DISNEY WORLD