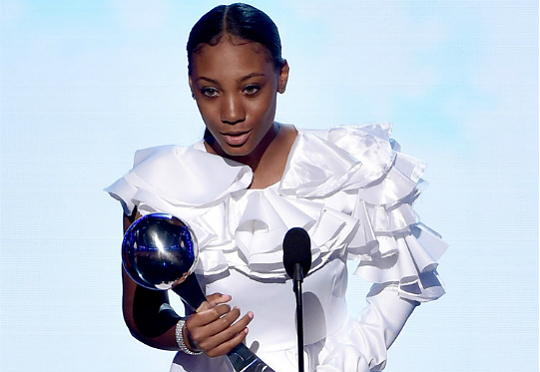 Mo’ne Davis was a guest of honor at last night’s ESPY Awards in Los Angeles. The teen was given the Best Breakthrough Athlete award for all of her hard work on and off the field.

Davis is viewed as an inspiration by many because of her incredible ability to beat the odds and be recognized as one of the greatest little league pitchers thus far. The teen has won a myriad of awards and was the first child athlete to be featured on the cover of Sports Illustrated a few months back.

“My life has changed a lot in the past couple of months,” said the young star during her acceptance speech for the Sports Kid of the Year award given by Sports Illustrated last winter. “It’s pretty crazy because you never see women in male sports. Just for me to be the starter of it is great.”

Mo’ne also has her own shoe line in collaboration with M4D3 (Make A Difference Everyday) that features bright and mild colored sneakers. “I never thought at the age of 13 I’d be a role model, but having young girls look up to me is pretty cool,” shared the star at the time of the sneakers’ debut. “Designing shoes with M4D3 is exciting and I wanted them to support Because I am a Girl to help girls and give them a chance at a better future.”