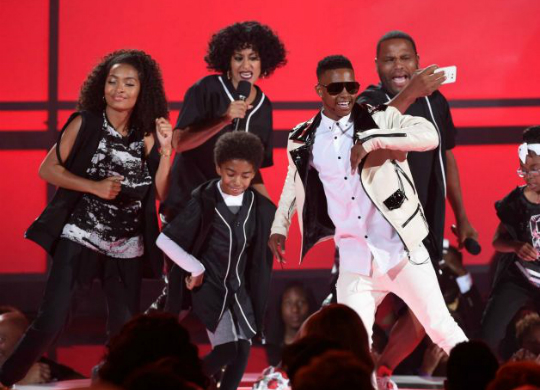 Yara Shahidi, from left, Miles Brown, Silento, Marsai Martin and Marcus Scribner got on stage to dance to Silento’s “Watch Me (Whip/Nae Nae)” at the BET Awards held in Los Angeles, California, on Sunday. The young stars were joined by their television parents Anthony Anderson and Tracee Ellis Ross.

Tracee Ellis Ross and Anthony Anderson were the hosts of the 2015 BET Awards. Zendaya Coleman, Nicki Minaj, and Kevin Hart, and Sean Combs were just a few of the stars who made appearances during the show. Combs was onstage with members from his Bad Boy record company and managed to excite fans even after suffering a nasty fall.

Season 2 of ‘Black-ish’ will air this fall. This year’s BET Awards were held at the Microsoft Theater.

Check out lots of pictures of the young stars below!