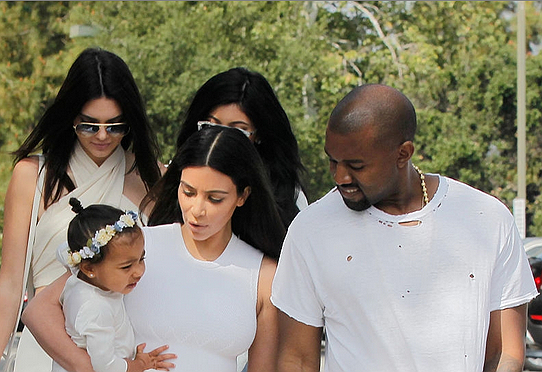 A little birdie tells us that Kim and Kanye West are leaning towards tradition when naming their second child. Family friends tell media that the couple are considering names that will honor Kanye’s late parents.

“There’s NO CHANCE their new bundle will be inspired by direction, like their firstborn. Everyone’s been speculating they’d go with something like South, East or even Easton — but we’re told there’s simply no direction in play. … Our sources say right now they’re leaning toward something more traditional … with a family-related influence. Think less ‘K’ name … and more likely something connected to Kim or Kanye’s late parents, we’re told.”

It wouldn’t be a surprise if Kanye and Kim named their second child after the rapper’s late mother, Donda West. After all, Kanye’s recent music video served as a sort of tribute to her and the artist mentions her every now and then during talks with media. “There’s been some ups and downs. I made some mistakes and I’ve made some accomplishments. There’s only one thing I regret,” said Kanye during one interview last year. “I wish that my mother could’ve met my daughter,” shared the star.

Kim and Kanye West are expecting their second child to arrive in December. The couple are already the proud parents of a daughter named North.

THE OBAMAS PAY THEIR RESPECTS TO THE BIDEN FAMILY