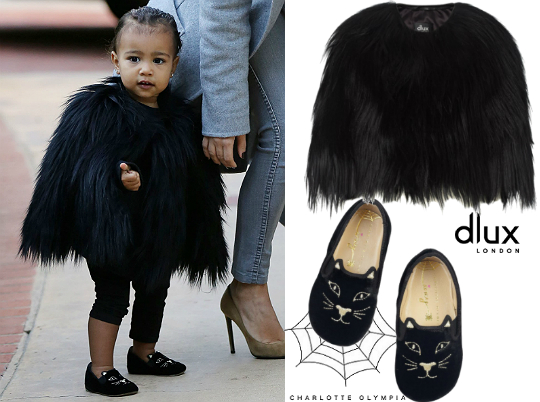 North West is turning into a mini fashionista. The tot recently accompanied mom to the spa in Beverly Hills while wearing an extremely stylish outfit. Kim Kardashian was thankful for her daughter, and we were thankful for North’s fashion sense.

The Black Goat Fur Cape by Dlux(sold out) perfectly matched the Kitten Loafers that Nori was wearing. Miss West showcased the same loafers, by Charlotte Olympia, on Halloween.

In all of the outfits that we’ve seen North in, we’ve never seen the tot adorned in pink. That’s probably because, “North doesn’t really like pink.” Kim Kardashian shared her daughter’s favorite colors during an interview with Elle earlier this year, and pink wasn’t one of North’s go-to schemes. “She’s very neutral,” explained Kim. “She doesn’t like prints… She hasn’t liked it for her whole life.”

Kourtney Kardashian gave more insight into North’s distaste for pink during another interview telling media, “Kim and Kanye don’t like pink or prints.” We guess the apple doesn’t fall too far from the tree.