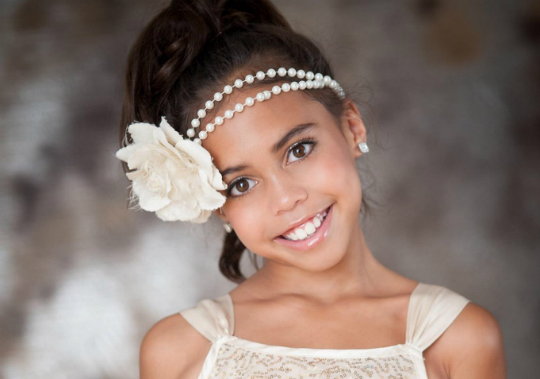 The 2015 film Sister Code, starring Amber Rose, Eva Marcille, and Drew Sidora will also be featuring some young upcoming stars. One of these youngsters, Asia Monet Ray will be portraying a young version of Amber Rose’s character, Lexi.

Asia, an 8-year-old triple threat, first gained notoriety after becoming a finalist and fan favourite on the reality TV show Abby’s Ultimate Dance Competition. She then starred on Dance Moms alongside her mother, Kristie Ray, and they are both now starring in her very own Lifetime series, Raising Asia.

But long before Asia graced the TV industry she was climbing the ranks. She began performing and competing in Figure Skating and Gymnastics at the age of two, before moving on to her true love: dance. At the age of five, she became the youngest winner of the StarPower National Championship Title. Her music is also available through her website.

In Sister Code, Asia has nabbed the role of Young Lexi, alongside Sade Kimora Young and Layla DeLeon Hays who portray Young Sheila and Young Lavae respectively. The dramedy will follow three women who grew up as foster sisters and explore the ups and downs of their lives following the tragic loss of their mother. It is expected to release sometime next year.

To learn more about the ambitious rising star, Asia, visit her website: www.iamasia.com.

HOLLY ROBINSON PEETE AND DAUGHTER ATTEND 'BEYOND THE LIGHTS' PREMIERE

HOLLY ROBINSON PEETE AND DAUGHTER ATTEND 'BEYOND THE LIGHTS' PREMIERE