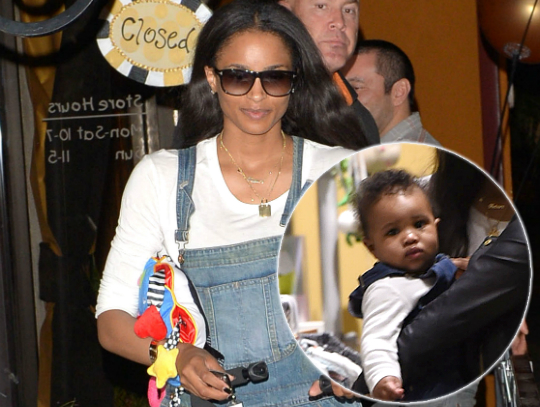 Even after giving birth, Ciara still has her glow! The R&B singer was recently spotted while enjoying a day out with her son in West Hollywood. Ciara pushed little Future around as photographers captured her enjoying a shopping spree at Bel Bambini. The ‘I’m Out’ singer smiled wide while sporting denim dungarees and holding what could have been a blanket underneath her arm.

Ciara has talked about the joys of motherhood on several occasions. “Being A Mommy Is Like The Best Thing Ever,” tweeted the star shortly after giving birth. “I’m totally inspired by the beautiful things that are happening in life right now,” said the singer during a recent interview. Ciara proudly proclaimed that her son inspires her to write music during the same conversation. “Absolutely,” gushed the star.

Little Future is Ciara and ex-fiance Nayvadius Cash’s only child together. He was born on May 19, 2014.

ERYKAH BADU AND DAUGHTERS SING A SONG ABOUT FEMALE EMPOWERMENT

ERYKAH BADU AND DAUGHTERS SING A SONG ABOUT FEMALE EMPOWERMENT