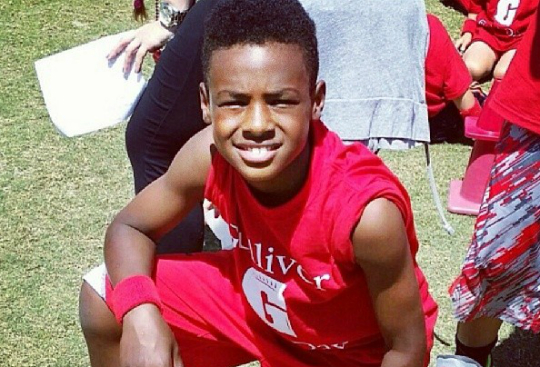 Although his father Lebron is a basketball legend who made the rare jump from high school straight to the NBA, present game rules dictate that all new NBA ballers must complete at least one year of college. So with a legacy name, and noticeable talent, it’s no surprise that recruiters already have their eye on Lebron Jr.

At just nine years old, it’s already become apparent that balling has been bred into him, and the one-on-one mentoring from pops can’t hurt.

Thad Matta, the coach of the Ohio State Buckeyes has revealed that once Lebron Jr. is old enough to be considered, he will be making serious moves to nab him. Eric Seger of The Lantern quotes Matta as saying the youngster “will be on his radar”.

All of this chatter may be a bit premature, but in the world of professional sports, it’s well known that it is never too early to plan for your future, and never to early to spot talent. In this case, Ohio State also has the benefit of being home to James. Lebron James is currently playing for his hometown, who’s to say his son won’t want to follow in those footsteps?

LIFESTYLE: INSIDE ELLEN POMPEO'S REINVENTED HOME, NURSERY AND ALL

Twenty-twenty one has seen a rise in young black actresses taking over Hollywood. And fans...