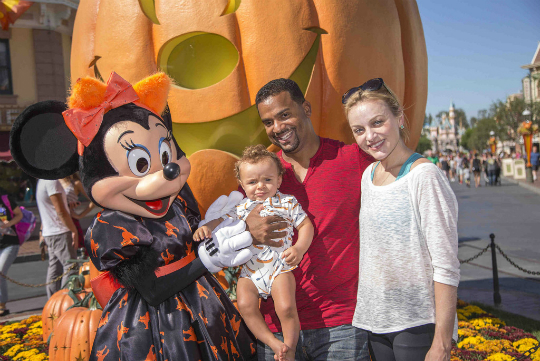 What better time to experience Disneyland than during Harvest? Alfonso Ribeiro and wife Angela recently took their 11-month-old son to Disneyland for the first time, and the little one enjoyed many of the sights.

Little Alfonso spent time with Minnie and took a picture in front of the big pumpkin. “Nothing beats taking your child to Disneyland for the 1st time,” tweeted Angela along with a picture of her and the family.

Mrs. Ribeiro and little Alfonso joined hundreds in the audience during big Alfonso’s performance on ‘Dancing With the Stars.’ Angela sat in awe of her husband’s skills as he and dancing partner Witney Carson performed to ‘Hey Goldmember’ by Beyonce on Monday night. “Such a memorable night,” tweeted Angela. “So proud of my hubby @alfonso_ribeiro who did an amazing job tonight on #DWTS! #proudwife.”

Alfonso and Angela welcomed their son into the world on October 27, 2013. He is the couple’s first child together. Alfonso Ribeiro Sr. also has a daughter named Sienna from a previous relationship.