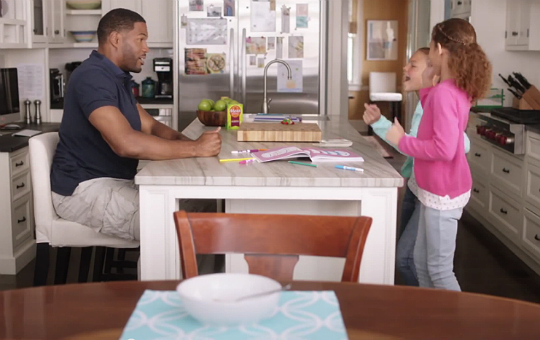 Michael Strahan has at least two reasons to stay healthy: Isabella and Sophia. The star recently did a commercial for Meta in promotion of its new product, MetaBiotic.

Strahan’s twin daughters were onset to help him convey the importance of the supplement. The girls were engaged in a staring contest with dad that rendered them the victors at the beginning of the commercial. Isabella and Sophia were later featured while playing a game with Michael.

MetaBiotic is a probiotic supplement that specifically helps maintain digestive balance while promoting an overall healthy immune system. Strahan decided to partner with the Meta brand after finding that keeping fit off the field is a challege. “Staying healthy after stepping off the football field was harder than I thought,” says the star. “My schedule became busier than ever. Now I look for small, healthy things I can do every day and that includes using Meta products. I am a believer in the brand, which is why I am excited to partner with them and help other people realize maintaining their health doesn’t have to be so hard.”

The Meta brand is also responsible for creating Metamucil, which has helped millions live healthier lives since its inception eighty years ago. Michael Strahan has four kids in all.