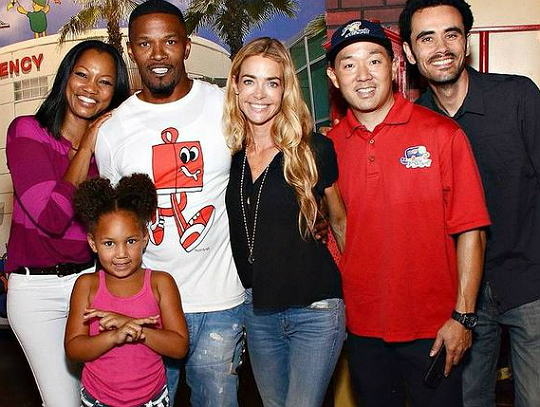 Garcelle Beauvais released the latest installment of her I AM series with family and celebrity friends by her side. The actress held her launching party for I AM Living in Two Separate Homes on Sunday, September 7, 2014, with Jamie Foxx, Halle Berry and a number of other Hollywood notables stopping by to give congratulations and best wishes for further success.

Halle took a number of pictures with Garcelle as the White House Down star held her book up. Berry also held a copy of the book close. The ‘Extant’ star has shown nothing but support for Garcelle in her efforts to teach children about social issues.

Beauvais created the I AM series with her kids in mind. Although there were plenty of books available for her to understand life’s differences, Garcelle noticed that few books taught Jaid and Jax how to interact in society as bi-racial kids with parents who were divorced. Beauvais’ first book in the series was called I AM Mixed, and received the acclaim of many parents with children of multiple races. Halle Berry wrote the introduction to the book in which she shared her experience of mothering a child who is both French and African American.

This latest installment of the series addresses the concept of divorce from the perspective of a child. Garcelle and ex-husband Mike Nilon have two kids together. The actress has three kids in all.

Check out more pictures from the launching event below!

EXCLUSIVE: LIL’ P-NUT PREMIERES "TRYING TO LIVE MY LIFE WITHOUT YOU" MUSIC VIDEO WITH OTIS CLAY