by Sarie
in Exclusives, NEWS, PHOTOS
0 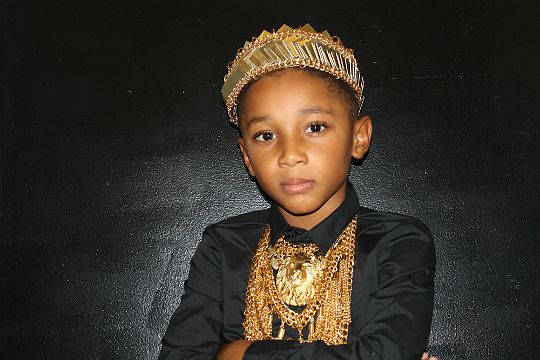 Kasseem Dean Jr. is making strides in the fashion industry. The son of Mashonda Tifrere and Swizz Beatz walked the runway for Laurel DeWitt at The Highline Hotel in New York City on Sunday, September 7, 2014. Mashonda couldn’t help but gush about her son after the show.

The celeb mom proudly tweeted, “Gold metal everywhere!!! What a successful night for my partner/sister friend @laureldewitt. @Kasseemsdream , you did such a great job.” Mashonda was also taken aback by Kasseem’s friends who came out to support the youngster in his efforts. “I had a major mommy moment,” wrote the star. “My highlight of tonight @kasseemsdream classmates came to support him. Melts my heart.”

This wasn’t the first time Kasseem modeled for Laurel DeWitt. The little one rocked a large crown with matching gold vest during his first fashion show hosted by the designer earlier this year. DeWitt launched her jewelry collection in 2010 to express her love for couture jewelry pieces. The designer has since grown her line to include dresses, ornate crowns, and gowns.

Little Kasseem has launched his own creative vision under Laura’s tutelage. ‘Kasseem’s Dream’ is a website that showcases Kasseem’s favorite things. Visitors can see everything from snacks that Kasseem loves to art that he absolutely adores on his site.

Mashonda has one child with ex-husband Swizz Beatz. Check out more pictures of little Kasseem below!