Home » NEWS » JAMIE FOXX AND DAUGHTER HANG OUT IN CALABASAS

JAMIE FOXX AND DAUGHTER HANG OUT IN CALABASAS 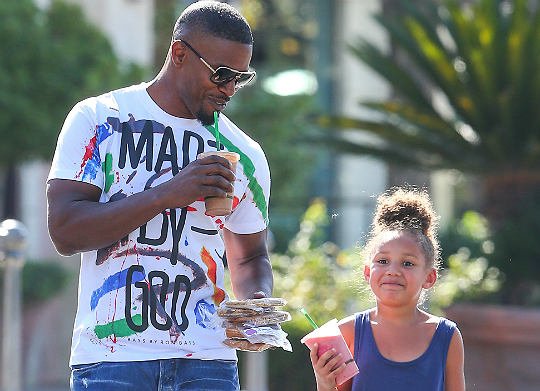 Jamie Foxx is getting that special father-daughter time in with his youngest daughter. The actor was spotted in Calabasas with little Annalise in tow on Wednesday.

Jamie ran into Jermaine Jackson on his way out of Sun Life Originals, and spoke with TMZ about his supposed role as Mike Tyson in the former heavyweight’s upcoming biopic. “You know, what I always say with those [roles], you got to keep it as under wraps as you can and see what happens,” said Jamie in response to the reporter’s request for details about the film. Annalise took a break from sipping on her Starbucks smoothie to look up and tell dad, “You don’t always say that” immediately after Jamie gave his answer. Cute.

Although he refused to go into detail about the biopic, Jamie did admit to meeting with Mike Tyson and told media that the former athlete had an amazing story to tell. Foxx has two kids in all.