JACOB LATIMORE OPENS UP ABOUT SUCCEEDING AS A TEEN AND MORE 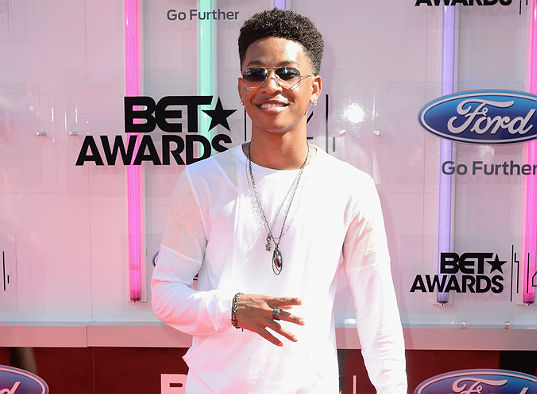 At just 17 years old, singer and actor Jacob Latimore is definitely playing with the big boys.

“I would call this industry a grown man’s business,” said the young star. “I like showing people that I am young, but I can really put my heart and soul into this. I really love this career so I’m definitely going to strive to be the best no matter what age bracket I’m in.” And it shows. His new track, featuring T-Pain, “Heartbreak Heard Around the World,” well, that has heart alright. He explained, “This song is basically me opening up about how I feel about my girl.” He added that T-Pain put a nice spin on it.

While collaborating with one of the rap-scene’s biggest current stars is exciting, there are even more partnerships Jacob hopes to forge in the future. At the top of his list, he named Justin Timberlake, Justin Bieber, Katy Perry, Timbaland, Jason Derulo, Usher and Chris Brown. The singer added, “I want to get a feel for everybody and different types of music.”

When the radios are off, Jacob can also be spotted on the big screen. He was featured in Black Nativity, Ride Along, and stars in the upcoming sci-fi film, The Maze Runner. The rising star discussed the drastic change of being in the backwoods of Louisiana for the shoot. “It was a different experience being out in the ‘wild’ because I’m a city boy.” All the same, he had a great time with the process, “We stayed in one hotel, so we were with each other 24/7 and we built a really nice relationship. I think the chemistry showed in the film.”

A much better memory than the snakes which were apparently quite rampant in the area! “There were a bunch of snake wranglers on set and they caught five or six snakes a day. They didn’t want any of us getting bit. I’m just a scaredy-cat, making sure I’m stepping in the right places.”

It might be a grown man’s business, but Jacob is certainly holding his own.

Below are more pictures of the teen star at the 2014 BET Awards.