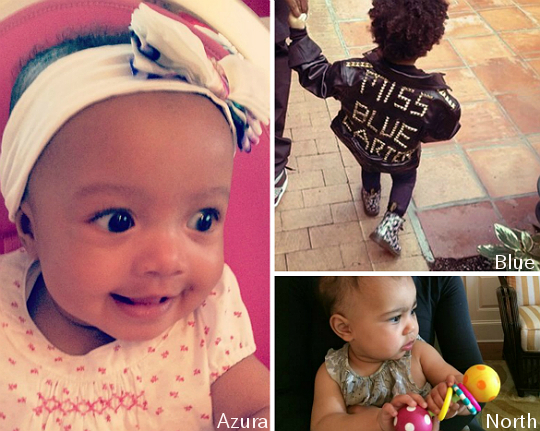 Of course, tots do not play any role in picking their outfits, so this congratulations is best given to the fashionable parents, Beyonce and Jay Z, and Kim Kardasian and Kanye West.

It’s no surprise really since these celeb couples obviously have impeccable fashion senses. Magazines heralded Kim’s lovely wedding look this past weekend, and even more recently she has been credited with bringing the pencil skirt into full trend status as it is being seen on more and more celebs. Meanwhile, people everywhere have been excitedly gabbing about Beyonce’s style for years.

Significantly, the poll was held by My1styears.com, a British site. So it’s no surprise really that the participants voted in their little Prince for number one. Perhaps this potential bias speaks even more in favor of Blue and North who were able to swoop in so high, followed by British singer Alesha Dixon’s daughter Azura Dixon, who came in fourth place. Clearly, the public looks forward to keeping their eyes on these star babies, but surely the celeb mommies and daddies are up for the challenge of making their babies shine in every outfit to come.

CHINA MCCLAIN TRANSFORMS INTO RIHANNA FOR 'SING YOUR FACE OFF'

CHINA MCCLAIN TRANSFORMS INTO RIHANNA FOR 'SING YOUR FACE OFF'