AMANDLA STENBERG STANDS UP TO POVERTY 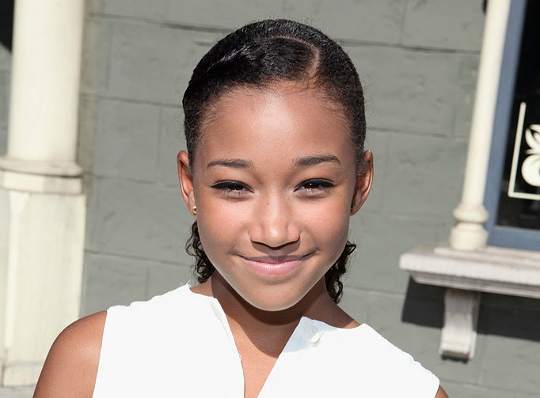 Amandla Stenberg has taken her role in The Hunger Games to a new, admirable level.

The 16 year old actress, who portrayed Rue in the 2012 blockbuster has decided to take on the Live Below the Line Challenge. She is featured on Youtube documenting her experience with it.

Run by the Global Poverty Project, the Challenge has been set forth all around the world as a way to raise awareness about the ever-present issue of extreme poverty. Taking the challenge would mean attempting to subsist for 1-5 days off of the average daily allowable expense for those living in extreme poverty in your geographical area. In the U.S., this is $1.50 a day.

Amandla’s video takes us to the grocery store where she makes a valiant effort to come up with some nutritious and substantial daily meals for her mere buck and a half. What quickly becomes evident is that it is simply not doable. By the end, she is left with very little food, and wonders how she will remain healthy and focused at school. The starlet concludes, “it’s pretty tough to live below the line.”

The Hunger Games, a story that is itself about extreme poverty in a futuristic dystopian world, is very much an allegory for the unseemly direction our world has been facing for a very long time. With the ever-growing gap between the rich and the poor, it seems there is no time like the present to confront the issues across various platforms. In the film, Amandla’s character is forced to compete in a fight to the death in the hopes of winning a lifetime of food and other necessities for her family and district. While at heart the film does explore some very significant world issues, it is still prone to dismissal for its entertainment purposes. But it’s great to see this starlet speaking out on these same issues on a more straightforward medium, giving her fans a chance to think beyond the screen and allowing the public to recognize the seriousness of the matter.

The young actress is also involved with the Share Our Strength (SOS) organization which also aims to end child hunger. It is also known as No Kid Hungry. Established in 1989, the non-profit organization recognizes child hunger as a national crisis and attempts to raise awareness about the importance of school breakfasts. The program collects donations in order to make these breakfasts happen, and these donations are matched dollar for dollar by the Arby’s Foundation.

On the topic of her charitable work, Amandla says “Food is such a basic human need. And I just know that we can provide for every kid in this country.” She explains her reason for taking on the challenge as follows: “In today’s world, extreme poverty and inequality are unjustifiable and unfair. Live Below the Line demonstrates the problem in a concrete way, while raising money to address the problem.” So far, the Global Poverty Project has raised $339, 143 with the Live Below the Line Challenge, but there is still time to get involved. You may sign up for the Challenge online to help raise awareness and funds.

A big congrats to this young actress for standing up against poverty. To support her in this Challenge, you are welcome to donate money directly.

EVELYN LOZADA HAS LOST 30 POUNDS SINCE GIVING BIRTH TO SON!

EVELYN LOZADA HAS LOST 30 POUNDS SINCE GIVING BIRTH TO SON!