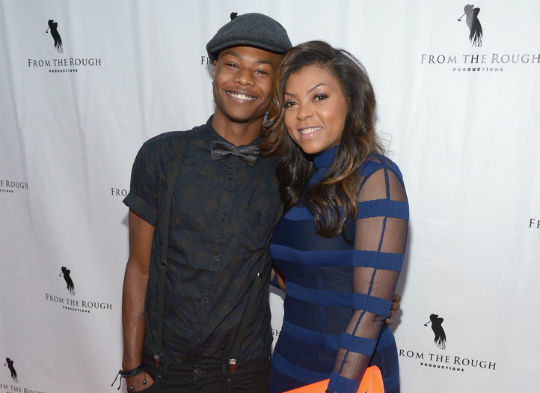 Marcel does mom, Taraji P. Henson, the pleasure of accompanying her to the screening of From the Rough in Hollywood, California. The 19-year-old looks fresh and fly in his overalls with bow-tie. Taraji is one of several stars in the upcoming sports drama that is based on the life and times of Catana Starks.

Starks is a woman who is determined to see her dream of becoming a golf coach come to fruition. The former Tennessee State swim coach takes on the challenge of taking a group of unruly young men from various aspects of life, and building them into a successful team. Taraji portrays Catana, and is featured alongside Tom Felton and LeToya Luckett in the film.

From the Rough will be available for public viewing on Friday, April 25, 2014. Marcel is Taraji’s only child with her high school sweetheart, who was murdered several years back. The 19-year-old is currently trying his hand at modeling.

OLUCHI ORLANDI AND SONS WANT A GENERATION TO BE 'BORN FREE'

OLUCHI ORLANDI AND SONS WANT A GENERATION TO BE 'BORN FREE'