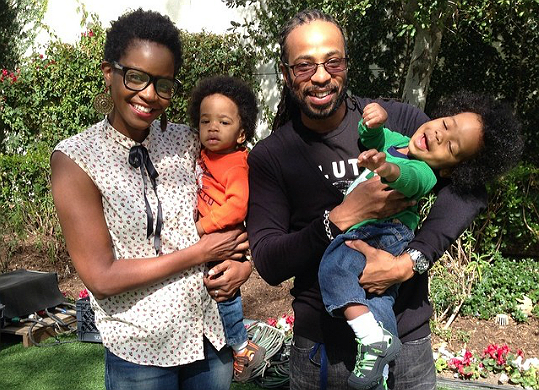 Tomiko Fraser-Hines and her sons are full of surprises. The model and her twins, Kaden and Bryce, recently gave Christopher Hines the shock of his day by showing up to his job with picnic basket and food in hand. “The boys and I visited Daddy at work today for a family picnic during his lunch break,” tweeted Tomiko. “It was a great time and we couldn’t have asked for a more beautiful day. I think @professorom was happy to see us. Family Is Everything! #twins#naturalhair#family#glasses#love#cutebabies.”

Tomiko has expressed the desire to have another child but is currently in limbo due to her age and financial standing. “I want to have another baby,” wrote the star in Mommy Noire. “My very wise husband doesn’t think our having another child is a smart move right now. His argument is mainly that we can’t afford to have another child at this moment…and he’s right.” Tomiko added, “Then there’s our age. My husband will be 45 this year and I will be 46…If we started the process today, it’s likely that I wouldn’t get pregnant for a few months–let’s say June for argument’s sake. That means that I would be close to 47 years old when I gave birth. 47! I know it’s been done, but that just sounds so…old. At least when I think about how old I’ll be as this baby grows up. And if it’s a girl, I’ll be in my 60s when she’s a teenager. That could be a dangerous combo! Can you say menopause meets puberty?”

Despite all the discrepancies, Tomiko still wants a baby girl. After all,”What Momma Goddess in her right might wouldn’t want the chance to bestow all of her womanly wisdom on her daughter?”

Tomiko and Christopher Hines welcomed their twin sons into the world on January 7, 2013.