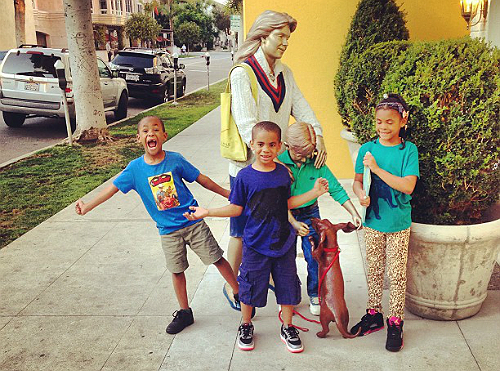 It’s a boy for Terius Nash, a.k.a. The-Dream, and his fiancee Lydia Seung Nam who welcomed their first child into the world over the weekend, according to website Global Grind. The bouncing little one is the fifth child for Terius who has twin boys and a girl  with Nivea and a daughter with Christina Milian.

The-Dream previously squashed rumors of him and Lydia expecting twins tweeting, “If someone is having twins it’s deff not me. Comon man…Run with it. Unless u mean twin turbo in this Benz.” Nash posted a picture of baby shoes next to his adult-sized Jordans a few weeks ago with the caption, “Ball” underneath.

Terius and Lydia are planning to wed later this year. The couple have been in courtship for several months.

JENNIFER HUDSON: 'I LOVE PLAYING BASKETBALL WITH MY MUNCHKIN'

JENNIFER HUDSON: 'I LOVE PLAYING BASKETBALL WITH MY MUNCHKIN'