Home » NEWS » IS MALIA OBAMA DATING? THE FIRST DAUGHTER IS GROWING BEFORE OUR EYES!

IS MALIA OBAMA DATING? THE FIRST DAUGHTER IS GROWING BEFORE OUR EYES! 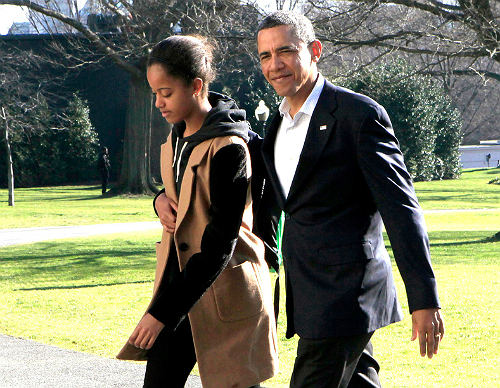 Has the older daughter of First Lady Michelle and President Barack Obama begun dating? Maybe so, maybe no. The President recently gave the press a bit of insight into his personal affairs and hinted to the possibility that Malia,14, might be experimenting in the dating realm.

During his discussion about the joys of parenting, the Chief of Staff revealed that his oldest daughter doesn’t have as much time for him anymore because she’s at sleepovers and out on dates. “I do have to warn the parents who are here, who still have young kids, they grow up to be, like five feet 10 inches. And even if they’re still nice to you, they basically don’t have a lot of time for you during the weekends,” said the President. “They have sleepovers and dates. So all that early investment just leaves them to go away.”

The Commander-in-Chief continued, “The great thing about the girls is they’ve got a wonderful role model in their mom. They’ve seen how Michelle and I interact — not only the love but also respect that I show to their mom. So I think they have pretty high expectations about how relationships should be, and that gives me some confidence about the future.”

Confidence about the near or distant future? Hmmm…

Is Malia, who began her first year of high school last Fall, dating? We shall see. President and First Lady Obama have two children-Sasha and Malia.