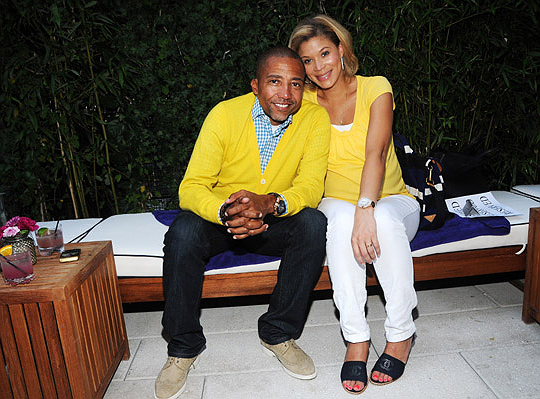 Congratulations are in order for music mogul Kevin Liles and his wife Erika. The couple welcomed their first child together, a baby girl, on September 20th, 2011. The NY Post reports:

Kevin Liles sprinted between P resident Obama’s swanky fund-raiser at Jane Hartley and hedge-fund honcho Ralph Schlosstein’s Park Avenue penthouse and Lenox Hospital between 6:30 and 9 Monday night. The former Def Jam honcho’s wife, Erica, was in labor during the intimate dinner, where tickets went for $71,600 per couple. Liles, who manages artists like Trey Songz, Big Sean and Nelly, arrived with Carmelo Anthony but dashed back and forth between the hospital and the event four times to check on Erica, who gave birth to their daughter, Genevieve, early yesterday morning. “[Obama] told me to go,” Liles told Page Six. “I said I have stayed as long as I can, and he said, ‘You have served your country.’ ” No word if Liles’ wife had an angrier response about his shuttle diplomacy. The event, attended by J on Bon Jovi and wife Dorothea was hosted by former Bill Clinton Treasury Secretary Roger Altman, p.r. magnate Michael Kempner, Chelsea Piers founder Tom Bernstein and wife Andi, and Renaissance honcho Stephen Robert and his wife, Pilar Crespi. (Source)

Kevin is already the proud father of son Kevin Jr, 13, and daughter Kayla, 11. Congrats to the couple!