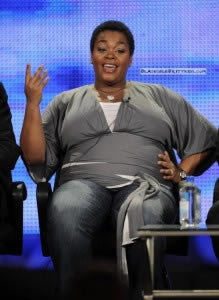 Via People.com:
R&B singer and actress Jill Scott and her fiancé, drummer Lil John Roberts, have welcomed their first child, a boy, her manager confirms to PEOPLE.

Scott, who stars on HBO’s new series The No. 1 Ladies’ Detective Agency, based on the popular novels by Alexander McCall Smith, discovered she was pregnant shortly before leaving for Botswana to film the show.
“At one point I was trying to gain weight for the role, and I noticed I had put on 7 lbs. in 7 days. And I thought, my god! What’s going on here,” she tells PEOPLE. “I thought something was wrong with me, and I found out I was pregnant the day I was supposed to leave for Africa.”