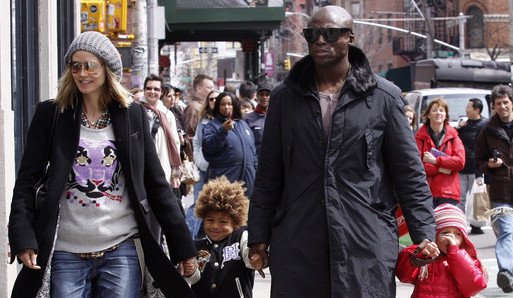 According to InTouchWeekly, Heidi and Seal are expecting! The news came courtesy of an “online mishap”:

“It looks like Heidi is four months pregnant,” an insider tells In Touch, explaining that the Project Runway host’s wardrobe plans gave her away. “Sketches leaked online of her in redesigned couture gowns to make room for a bump, but were quickly taken down!” This will be the fourth child for Heidi, 35, and Seal, 46. They have two biological children together — Henry, 3, and Johan, 2 — and Seal is the adoptive father of Heidi’s daughter, Leni, almost 5. The insider believes the pair will share their happy news soon: “She plans to announce her pregnancy when she wears the dress [from the leaked photos] to the event.”

THE KLUM-SAMUELS TAKE A TRIP TO THE MUSEUM