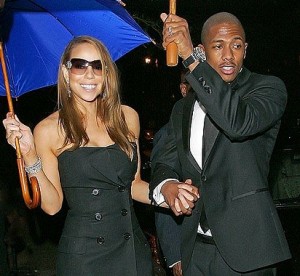 Contrary to popular believe, Mariah Carey and Nick Cannon are not pregnant.  However, the couple  do plan on having kids oneday soon. Nick says,

“We’re definitely into planning a family and stuff but when everything calms down and we get the time,” he told E!’s Mark Malkin at the Sundance Film Festival. “We’re just running and gunning now and enjoying being newlyweds.”

For now, the two are focused on working on their individual film projects. Cannon is in Sundance to promote his film, “The Killing Room, which he says portrays him as a “serious method actor”

It was my first real chance to be a serious method actor. I lost like 20 pounds for the role. I didn’t eat. I slept outside. I didn’t comb my hair for a month. I went into seclusion.