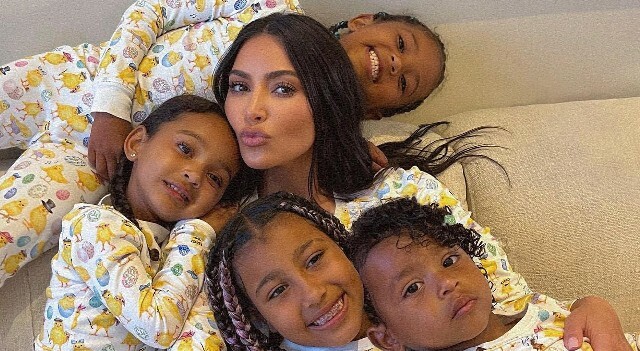 To say that Kim Kardashian has her hands full as a parent is a bit of an understatement. The 41-year-old is mother to North, 9, Saint, 6, Chicago, 4, and Psalm, 3. Recently, we learned that the SKIMS founder couldn’t use many of her holiday pictures due to the fact that her daughter was showing her middle finger. Well, Kim’s off-spring is back at it again and in the news. This time, it’s not North, but her brothers. Kim Kardashian had to scold her sons during a TV interview just hours after they crashed her Instagram Live.

In about minute 1:22, the reality television star briefly stopped her interview with Jimmy Fallon to scold her sons.

“Guys!” she said, turning her face towards sons in the wings. “Guys, can you stop?”

She continued, “This is your first time at work with me, can you please?”

She went on to explain, “My two boys are here, and then my friend Tracy’s daughter Remi is here with us. I hear them making so much noise.”

Brushing it off with a laugh, thinking she had gotten her point across, she said, “Guys, this is your first time at work with me. Don’t mess this up. Come on.”

However, the boys missed the point and at mark 2:16, she had to intervene again, this time a bit more forceful, telling them that one had to “go”.

The camera confirmed that it was the younger of the pair, Psalm, who was the guilty noise culprit.

The Kardashian’s star said, “Psalmy left. Psalm went, he was being loud.”

Perhaps the pair was still on a roll from earlier in the day when they crashed their mother’s Instagram Live in a duo act.

Six-year-old Saint was the guilty culprit, this time around, as he was yelling inappropriate things during the Live.

According to Page Six, this is how it all went down!

“Say hi!” Kardashian encouraged the boys then saying, “This is called Instagram Live.”

Well, Saint did just that, but in his own way special way of giving greetings and salutations to the world.

“Hi, weirdos!” Saint interjected as he popped up from outside the frame. Kardashian quickly scolded him.

“Hey, stop it!” she demanded. Then, following his brother’s lead, Psalm started mumbling and babbling loudly.

Saint popped back into frame, with a mischievous grin, adding, “If you’re watching this, I hate you!”

The entire Live ended with no trip to the toy store, but a kiss for each of the boys from mom.

So, what do you think? Is it just, “boys being boys?” Sound-off and comment below. We want to hear from you!