"It Was A Really Good Movie, Daddy" 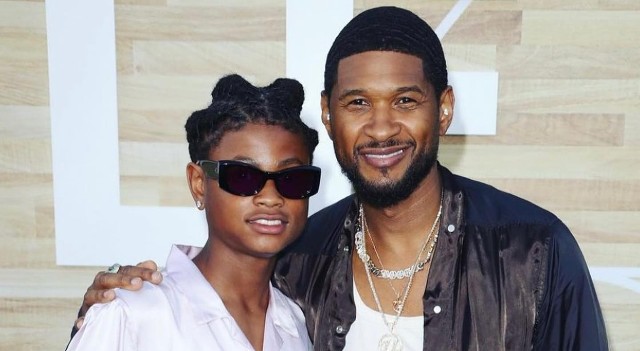 Usher and Jaleel White brought their kids to the premiere of Netflix’s Hustle this past weekend. The event was star-studded as A-list stars in the film met up with A-list entertainers who came out to support.

Usher and his son, Usher V, looked fresh on the red carpet. Many could not believe Usher’s son had gotten so big. “Wow, Usher’s son [is] all grown up [and] in style like his father,” one Instagram follower said after viewing the pictures of Usher V posing in the spotlight while standing beside his father. “He is gonna (sic) step into his father’s footsteps for sure,” the fan predicted. “Like father, like son.”

Jaleel White and his daughter, Samaya White, were also at the premiere. Samaya hob-knobbed with Queen Latifah and Adam Sandler who were in the film with her father. “It was a really good movie, daddy,” Samaya reportedly told her father after the premiere. “I would tell you if it wasn’t,” the teen said.

Hustle is the story of Stanley Sugerman (Adam Sandler) who is a scout for the 76ers. The NBA specialist has been in the industry for nearly a decade, yet underrated and unappreciated the entire time. Sugerman is looking for his big break. He finds it in Bo Cruz (Juancho Hernangomez). He is fast and smart on the basketball court and just what Sugerman needs to show those in higher positions he is capable of finding the “man of the hour.”

Being far away from home, though, comes with consequences. Can Bo prove himself when taken out of his element in Spain and placed in a league of extraordinary players in the United States? It’s a story of tenacity and excellence that fans have not seen on the big screen since the days of Rocky.

Hustle comes to theaters and Netflix on Wednesday, June 8, 2022.