"You Make Your Father Proud Daily!" 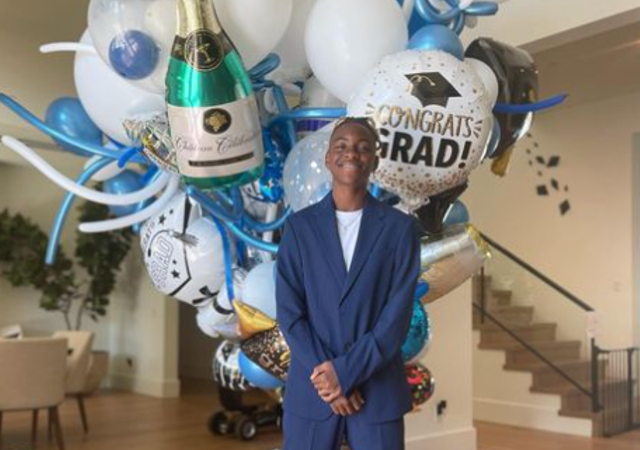 Kevin Hart is beaming with pride after his son, Hendrix, graduated from the 8th Grade earlier this week. The Man From Toronto star took to Instagram on Wednesday (May 25) to dote on his kid.

“The flyest/coolest kid that I know,” Kevin said of Hendrix. “I’m so proud of you son,” the celebrity father continued. “Congrats on conquering this stage of life. So many stages left to go. [But] at this rate and pace you are poised and positioned to conquer them all. Love you champ. You make your father proud daily!”

Hendrix is Kevin Hart’s youngest child with his first wife, Torrei Hart. The youngster is often deemed as Kevin’s “mini-me” online. Many also comment on Hendrix’s height in comparison to his father. In fact, it was just last year that fans mused about Hendrix towering over his father at just 14-years-old.

“Kevin’s son is already taller than him,” one social media follower joked after seeing a picture of Hendrix and Kevin standing side by side. “That’s got to be his son’s max height,” another mused in reference to Kevin’s stature.

Although some may view jokes about his height as insensitive, Kevin Hart doesn’t mind his fans having a good laugh at his expense. “I’ve always been comfortable with it,” the comedian said of his 5’4″ body build during an interview on Oprah Prime. “I’m beyond confident,” Kevin added. “I’m not cocky,” the celebrity father clarified. “I’m so confident,” Hart continued.

Kevin loves himself as well as his family. The celebrity father took to Instagram on his oldest son’s fourteenth birthday to express his love. “Taller than me and already cooler than me,” Kevin said of Hendrix who received sneakers from Russell Westbrook on his special day. “Love you, son,” the celebrity father added.

Kevin Hart has four kids in all.

HOW TO TALK TO KIDS ABOUT GUN VIOLENCE IN WAKE OF UVALDE, TX SHOOTING

HOW TO TALK TO KIDS ABOUT GUN VIOLENCE IN WAKE OF UVALDE, TX SHOOTING