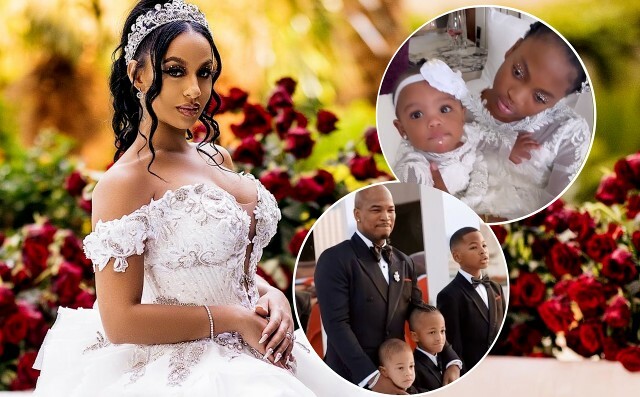 Ne-Yo and Crystal Smith made their vow renewals a family affair this past weekend! The famous couple shared pictures and video footage from the event, which included the kids.

Resort World Las Vegas was the venue of the hour as Ne-Yo and Crystal chose the luxurious location for their ceremony. The Smiths made the event magical by having everything one would expect at a wedding. The bridesmaid and groomsmen wore red, which coincided with the red roses that filled the venue. Crystal, meanwhile, wore a beautiful white gown that was nothing short of breathtaking. Every portion of Mrs. Smith’s dress was detailed to perfection. “Absolutely amazing,” one social media follower said of the occasion. Dozens more agreed that Ne-Yo and Crystal Smith’s vow renewal was simply beautiful.

Ne-Yo and Crystal Smith have done much to heal their marriage after entertaining the notion of divorce nearly three years ago. Ne-Yo filed for marriage dissolution months before the coronavirus pandemic led to lockdowns. The extra time spent at home proved to be the solution to the problems the Smiths were facing in their union.

“What the quarantine did was kind of force us to sit down and have these really uncomfortable discussions that we, honestly, would not have had otherwise,” Ne-Yo shared during a recent interview with ESSENCE.

“We would’ve never had the patience to sit in each other’s face and really just talk about what we don’t like about each other,” the producer added. “If I’ve got an excuse to be gone, I’m gone,” Ne-Yo admitted.

“[The quarantine] made us face the conflict head-on and what that did is basically strengthen us because now, I don’t have to pull punches when I talk to you. You know exactly where I stand. I know exactly where you stand and through that, we’ve decided to keep going and it’s a more genuine feel to what it is we’re doing now. It’s still a learning process.”