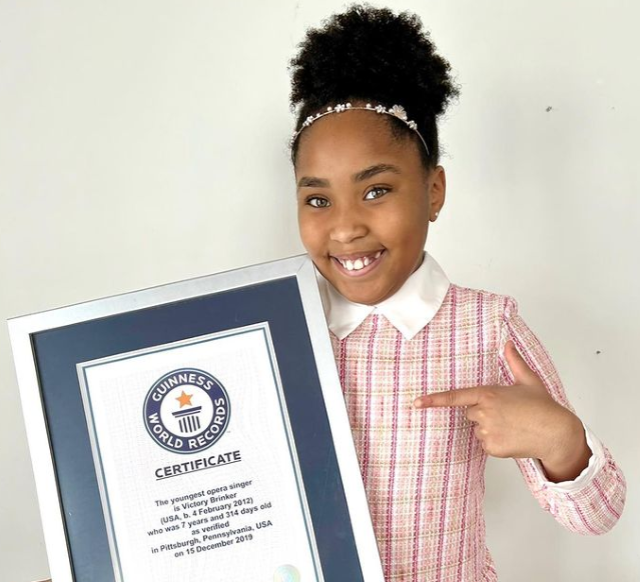 Big congratulations are in order for Victory Brinker as she has set a Guinness World Record as the world’s youngest opera singer!

The ten-year-old singer excitedly posted the good news on Instagram saying, “I set a Guinness World Record! While performing on Italian TV, I was surprised with the GWR title of World’s Youngest Opera Singer based on my very first opera contract at age 7yrs 314 days!”

She continued, “Special thanks to the @thepublicpgh @yesyesmaryasea and @ricksebak for inviting me to be part of their amazing show and believing in me three years ago! Thanks and Love to all who have been a special part of my journey!”

And her journey truly has been an incredible one.

Victory is one of 11 children, adopted as a baby, yet even as a toddler, her family knew that she was special. Two days before her sixth birthday, the talented opera singer asked her mom to help her discover who could sing the highest notes, sparking a passion for opera singing.

From that moment on, Victory declared, “I’m going to be an opera singer.” And she has unquestionably accomplished just that.

“My mom taught me how to sing and helps me believe I can do anything. No matter what I want to do next, she finds a way to help me to do it. She is always cheering me on,” Victory said in a recent interview. “I love the challenge of the difficult arrangements, the technique required to sing, all the runs, and the different languages all the arias are written in.”

10-year-old Victory Brinker has set the Guinness World Record for the youngest opera singer in the world. Listen to her rendition of Mozart’s 'Der Hölle Rache,’ one of the most difficult arias to sing. pic.twitter.com/X6srgai35H

According to her official website, Brinker is a classical singer who sings songs in 7 different languages.

Victory has been blessed to perform all over the USA, appearing on NBC’s Little Big Shots, Wonderama, DreamWorks Trolls Video (German), Carnegie Hall, the Apollo, for many NBA games, and the Pittsburgh Pirates 2019 Home Opener. She has acted in three films, and with the Pittsburgh Public Theater stage show, Lights and Legends. And of course, let’s not forget that she brought the judges to their feet on AGT, unanimously getting a golden buzzer.

This is just the beginning for the amazingly talented young singer. Congratulations, again Victory. We cannot wait to see what is next!