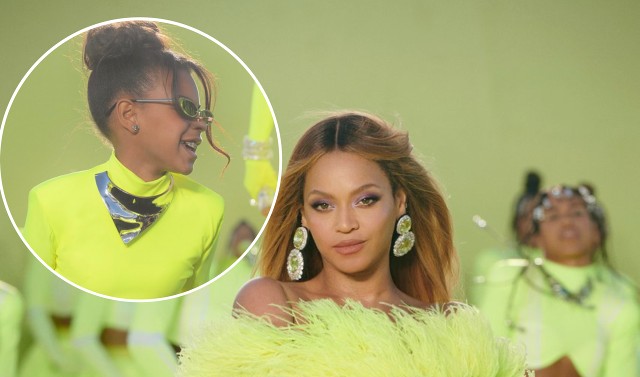 Blue Ivy Carter joined her mom Beyonce onstage at the 2022 Academy Awards on Sunday night. The 10-year-old was front and center as she danced while Beyonce performed her Oscar-nominated song “Be Alive” from movie King Richard.

“Did y’all see BLUE IVY getting in her eight counts?!! one fan commented on Twitter after spotting the youngster onstage.

Did y’all see BLUE IVY getting in her eight counts?!! #Oscars #Oscar pic.twitter.com/Ub6tlKcDpO

Another wrote, “Not Blue Ivy dancing. One thing about Beyonce she’s gonna give her child a chance to shine!!!”

“Blue ivy is 10, has won a Grammy, NAACP AND performed at the Oscar’s…”, another fan noted.

At just 10 years, Blue has won a multitude of awards, including two Soul Train Music Awards, a BET Award and a NAACP Image Award. Ivy-Carter is also listed as a co-writer of the song, “Brown Skin Girl, alongside Beyoncé, Jay-Z, Wizkid, SAINt JHN and others. Most recently, the multi-talented young star solidified herself as a Voice Over actress by winning the Best Voiceover award for her work at the Voice Arts Awards.

BLUE IVY PERFORMING WITH HER MOTHER AT THE OSCARS AT AGE 10!!!! LEGEND #Oscars pic.twitter.com/5QnpcFmneM

Blue Ivy Carter is indeed making a name for herself in the industry. Not only is she establishing herself as a role-model to young girls everywhere, but she is also helping inspire girls to dream big, never say, “can’t”, be confident, and know that age is just a number.

King Richard is nominated for six awards tonight, including Best Picture, Best Actor for Will Smith, who starred as the Williams’s father, Richard, and Best Original Song for “Be Alive.”