"Did Not Expect It To Gain That Much Traction" 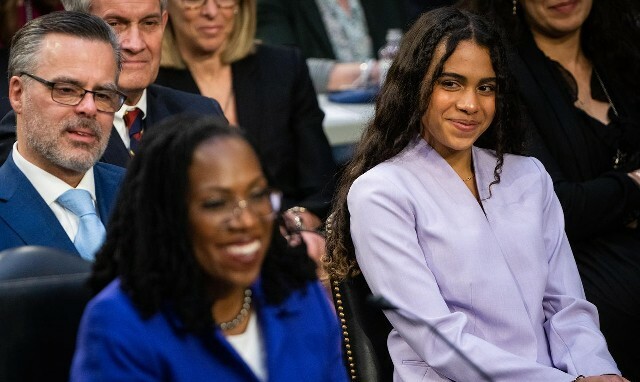 There is a story behind that viral photo of Ketanji Brown Jackson and her daughter, Leila. The photographer behind the incredible shot recently spoke with the New York Times about her decision to photograph Leila during the first day of her mom’s confirmation hearings.

Today I spoke with @nytimes about what this photo means to me. Full story here: https://t.co/p2vE8dAYmb

“I did not expect it to gain that much traction,” Sarahbeth Maney said. “I instantly posted it because I knew what I felt when I took the photo, and I really gravitated toward it,” the photographer said.

“I just remember seeing Judge Jackson smiling a lot, and I think she was receiving compliments and praise,” Maney shared. “And then I noticed how proud her daughter was of her, and it gave me chills when I saw this look that her daughter gave her. It was just this look of such pride and admiration.”

Adding, “When I saw the look that Leila gave to her mother I was like, wow. I felt what she was feeling as a young Black woman because I know what it takes to create a seat for myself in a space that isn’t historically created for me to be in. I saw the expression that she gave her mother, and I waited until I saw it again, because I knew that I wanted to photograph that specific facial expression. I knew how much it revealed in her admiration for her mother as a Black woman.”

Maney took a picture that spoke to the masses earlier this week when she captured Leila looking on her mom with pure admiration and pride. Many shared the picture on Instagram with captions and comments from the heart.

Ketanji Brown Jackson is an inspiration to many as the first African-American woman to receive a nomination to the Supreme Court of the United State. Jackson received bachelor’s degree from Harvard University and her law degree from Harvard Law School. She currently serves as a federal judge on the United States Court of Appeals for the District of Columbia. She previously served as a district judge for the United States District Court for the District of Columbia and is presently a member of the Harvard Board of Overseers.

Some critics of Jackson have deemed her as “soft” on child predator crimes. The Supreme Court nominee, however, has a record not significantly unlike current Supreme Court justices when it comes to child predator cases. Equally important to note is Jackson’s stance on Critical Race Theory (CRT), which she does not rely on when making decisions in the court.

“I hope to inspire people to try to follow this path, because I love this country, because I love the law, because I think it is important that we all invest in our future,”Ketanji Brown Jackson said during her confirmation hearings. Jackson is expected to be confirmed as a Supreme Court Justice bt April 8, 2022.