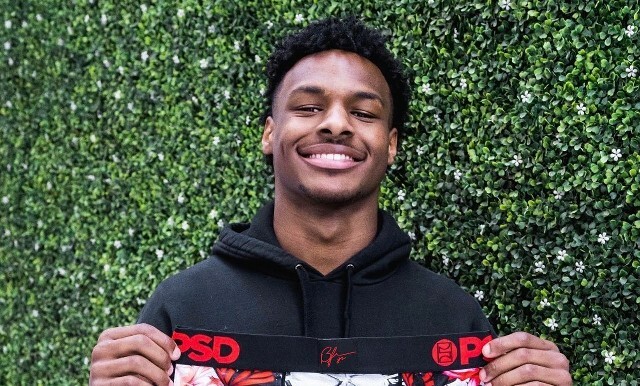 Bronny James has signed his first NIL deal with PSD Underwear. PSD, which stands for “Pants Saggin Dezign”,  is known for partnerships with professional athletes, including Ja Morant, Jimmy Butler, and Chase Elliott. Bronny is the youngest athlete/entrepreneur to partner with the well-known underwear brand.

“I’ve been wearing PSD for as long as I can remember,” Bronny commented in a recent press release regarding the deal. “When the connection is real and authentic, it makes a partnership like this really exciting. I’m looking forward to sharing my ideas and input to create some pretty unique pieces.”

And of course Bronny’s famous father is extremely proud of his 17-year-old son.

Yessir!!!! Who’s ready for the Bronny collection that’s coming with @PSDunderwear??!!! Well I know I am!! Need those ASAP son! Thank you in advance. Lol. Congrats Young 🤴🏾 #ThekidfromAKRON🤴🏾 pic.twitter.com/Qf9mi8tA69

According to Yahoo Sports, Bronny James is one of the most popular high school basketball players in the world. PSD is probably the beginning of many NIL deals that Bronny will sign while still in high school. According to a report from On3, although the financial details of Bronny’s deal with PSD were not disclosed, he is projected to make $5.1 million in NIL deals before he graduates from Sierra Canyon. And of course, the NIL deals will not stop there, they will probably continue to roll in during his college years as well.

Earlier this month, the rising entrepreneur filed three trademarks suggesting that he will venture into video games, clothes and NFTs (Non-Fungible Token).

Of course, everyone from Duke, Ohio State, UCLA, Michigan, Kansas, Tennessee to Texas are looking at the 6’2″ junior in hopes to make him a part of their basketball teams.

Congratulations, Bronny! This is just the beginning. We cannot wait to see what is next.