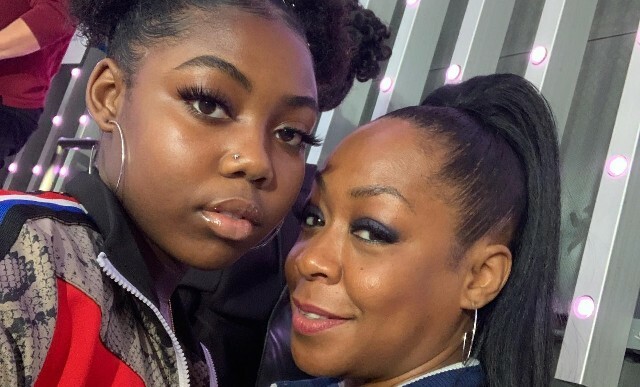 Tichina Arnold’s daughter, Alijah Kai, continues to build her career as a singer. The youngster recently sang the national anthem of the United States at a school game. It was the first time Alijah rendered the selection in public.

“She killed it,” Lisa Vidal said after watching a video clip of Alijah singing the anthem. “That was amazing,” another fan said. “It was once told to me that the National Anthem was the hardest song to sing and she did that thing like it was the Super Bowl,” the supporter continued. “Congratulations.”

It was just a few weeks ago that Tichina and Alijah discussed mental health and expressed their desire to break stigmas that keep some from addressing challenges. “She has a harder time expressing herself due to the fact that back then she wasn’t able to really talk about her mental health,” Alijah told ESSENCE in reference to her mother being more private about the matter of mental health. “I love to kind of force her to talk to me and force her to open up with me and force her to feel what I’m feeling,” the teen said.

Tichina agreed that she learns a lot from her daughter. “Being a mom is not perfect,” Arnold shared with the press. “Every day is just a different situation,” Tichina added. “As long as I am her mother I’m going to be learning how to be a mother until the day I die.”