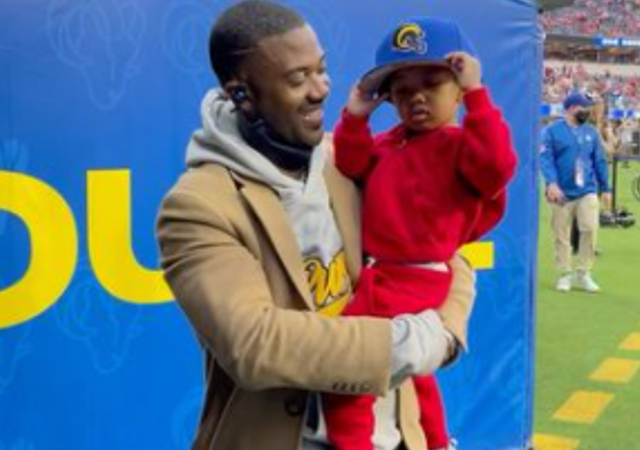 Ray J, Kanye West, and Jay-Z attended the Super Bowl with their kids. The celebrity fathers joined others at what turned out to be a star-studded event at the SoFi Stadium in Inglewood, California.

Blue Ivy Carter stole the show from her father. Many commented on the youngster’s style, which was casual, at the game. “Whoa! Blue, slow down,” one BCK social media follower said after seeing a video clip of Blue on the sideline with her dad before the big game. “You have gotten so Tall,” the fan continued. “Such a Beautiful and Vibrant Young Lady.”

North West and her younger brother, Saint West, were also in attendance at the Super Bowl game this past Sunday. The little ones sat with their father, Kanye West, who took to Instagram earlier in the day. Kanye announced his plans to release Donda 2, his eleventh studio album, later this month during Super Bowl weekend. Miami will take center stage as Kanye plans to hold a large listening party at LoanDepot Park.

Ray J shared a video clip of him with his son, Epik Ray, on the field before kickoff at SoFi Stadium in Inglewood this past Sunday. “Let’s Go L.A.,” Ray wrote online. “The city is ready,” he exclaimed.

The Los Angeles Rams were successful in their quest to become Super Bowl champions this year. The team beat its competition, the Cincinnati Bengals, with a final score of 23-20. Sunday’s win was the first title for the Rams in 22 years and also the second Super Bowl championship win for Los Angeles. The city’s last NFL victory was in 1983 when the Los Angeles Raiders beat the Washington Redskins with a final score of 38-9.

The Raiders currently have a home in Las Vegas. Meanwhile, Los Angeles claims both the Rams and Chargers as NFL teams. Football season 2022 kicks off in September.

NAOMI INTRODUCES HER DAUGHTER: 'SHE WASN'T ADOPTED, SHE'S MY CHILD'