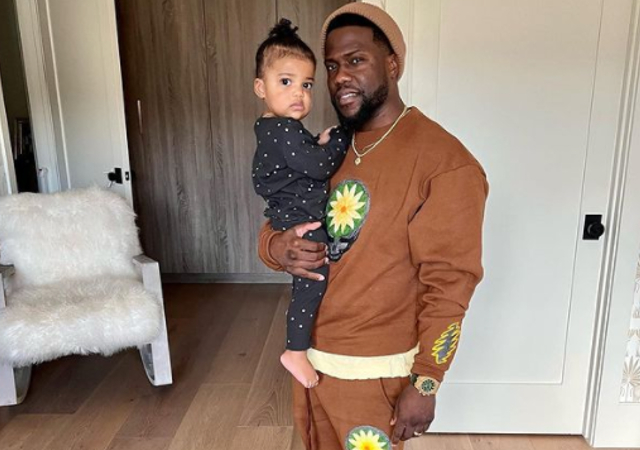 Kevin Hart’s kids are growing by leaps and bounds. The comedian talked about his daughters, Kaori and Heaven, during a recent interview with Ellen DeGeneres.

“She’s got a couple words she’s put together,” Kevin said when discussing Kaori’s development. The 17-month-old is exploring the world of language, which includes a few words typically reserved for adults. “She said sh*t,” Kevin told Ellen in reference to Kaori using profanity. “I’m not celebrating it,” Hart shared. “I’m not saying it because I’m proud but yeah sh*t is a good one.”

Kevin Hart admitted that he was the one to blame for his youngest daughter’s use of mature language. “For me, I have a very foul mouth but it’s innocent, like, I’m not an aggressive curser. It’s not like offsetting. It’s light,” Kevin told Ellen. “So she hears me say that and she picked it up.”

Kaori is getting a grasp of the art of language while Heaven is driving and planning to go to college out of the state. “I love that she’s growing up, that’s my best friend, my heart,” Kevin told Ellen. “It’s a little emotional,” the comedian admitted. “I see myself realizing that that time is coming for her to leave the house and I don’t like it,” the celebrity father said. “She’s already talking about going to school somewhere else. She’s way too excited about it.”

Kevin has been hard at work trying to convince his oldest daughter to stay in Los Angeles for college. “I’ve been trying to manipulate her like, ‘Maybe you need a place here in L.A. ’cause the schools here are just better. Maybe somewhere not that far so I can get to you,'” Hart shared. “She’s talking about New York. She wants to go and get away,” the celebrity said.

Kevin Hart has two kids, Kaori and Kenzo, with his wife, Eniko Hart. Heaven and her second-youngest brother, Hendrix, are Kevin’s kids with comedienne Torrei Hart.

MARQUES HOUSTON: 'BEING A HUSBAND AND FATHER ARE TWO OF MY BIGGEST ACCOMPLISHMENTS'

MARQUES HOUSTON: 'BEING A HUSBAND AND FATHER ARE TWO OF MY BIGGEST ACCOMPLISHMENTS'