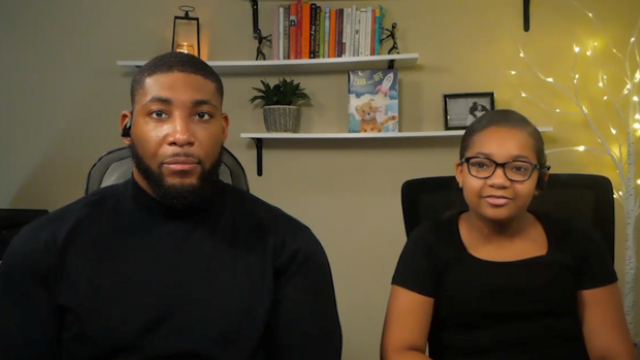 Beating cancer is most definitely a superhero feat. For children, it is unquestionably double so. September is Childhood Cancer Awareness Month and former NFL football player Devon Still and his daughter Leah sit down with CBS News to talk about their experience with Leah’s neuroblastoma. During the interview, the pair talk “survivors remorse” and how they are helping other kids.

Still continued, “When you look at the battle with cancer in its totality, it’s kind of demoralizing. So, what we decided to do was just attack each day, to try to have fun and enjoy our life and the moments that we had together.”

Leah, who was diagnosed with the disease when she was 4-years-old, was given a 50/50 chance to live. Leah underwent numerous rounds of chemotherapy, antibody therapy and radiation all while holding on to her father’s mantra, “Win the day.”

Now, 11-years-old, Leah has been in remission for six years and cancer-free for one.

“I was really excited and it was so important because I was finally cancer free. And it was such a huge relief,” the adorable preteen told CBS News.

Still said in the interview that the pair has met many children along the way that did not make it. He said that they both struggled with “survivor’s remorse.”

In order help find a way to give back and help other families overcome, Still and his sixth-grader founded the Still Strong Foundation, which provides financial support to families battling childhood cancer. Additionally, the dynamic duo has partnered with “Braving NeuroBLASToma,” a book series to help guide families through the terrible disease.

In the interview, Leah spoke poignantly to those who are still suffering and fighting the disease, giving them a word of comfort and advice.

“You may think you’re alone, but you’re not, and I completely understand what you’re going through. And sometimes it’s hard to open up about it and I think that it’s important to open up about it because me and my dad were very open to each other,” she said.

Well-said, Leah! Keep leading the charge alongside of your father to put an end to childhood cancer.

If you or someone that you know needs information on neuroblastoma, click here.

CARDI B AND OFFSET'S DAUGHTER, KULTURE, IS OFF TO SCHOOL