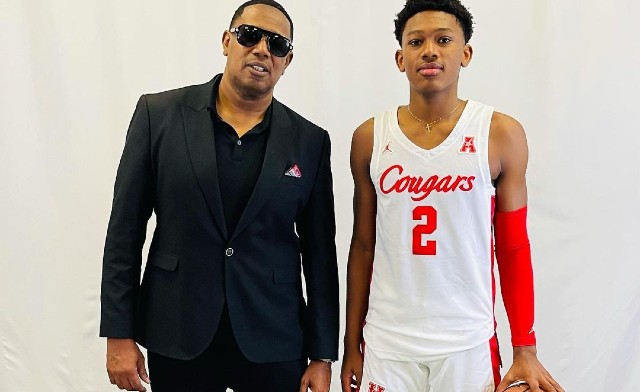 Master P’s son, Mercy Miller, has made an early commitment to play at the University of Houston after he graduates from high school. The celebrity father took to Instagram to share the exciting news with his fans earlier this week.

“Hard work pays off,” Master P told his social media followers. “My son @mercymiller is a 6’4 High School Sophomore shooting-guard at Minnehaha Academy, ranked #1 Basketball Player Class of 2024 in the state of Minnesota. He has decided to make an early commitment to be a student-athlete at the University of Houston,” the celebrity father said.

Master P went on to explain why Mercy chose the University of Houston. “My son @mercymiller has already won a High School State Championship as a Freshman,” the celebrity father shared. “For the future, he’s focused on winning a College Championship where all the great legends came from like Elvin Hayes, Hakeem Olajuwon, and Clyde Drexler. And that’s why he decided to make an early commitment to the University of Houston.”

It was just a few weeks ago that Master P’s older son, Hercy Miller, made history by signing a $2 million endorsement deal as a college freshman at Tennessee State University (TSU). The deal came shortly after the NCAA changed its rules regarding college athletes earning compensation for their talent and several months after Hercy decided to commit to Tennessee State in an effort to uplift HBCUs.

Mercy appears to follow in his brother’s footsteps with his latest decision to commit to the University of Houston as a high school Sophomore. “I’m proud of my son @mercymiller,” Master P told his social media fans earlier this week. “Not just for being an elite basketball player, but an A student with a bright future,” the celebrity father exclaimed. “A 15-year-old that works hard and knows what he wants out of life. #Godisgood #universityofhouston.”