Toryana Jackson has just graduated high school and has already made history. The Syracuse teen has made history as the first black female valedictorian of her high school. 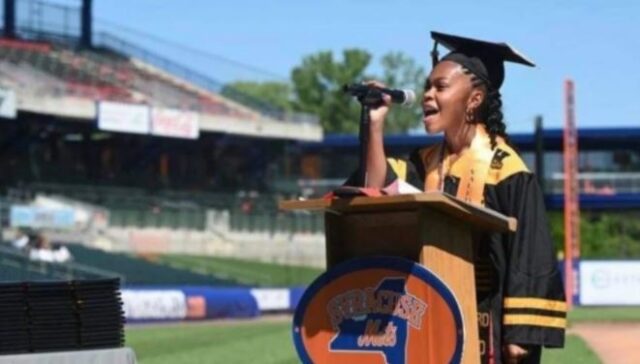 “I didn’t realize it until after I became valedictorian. My parents had Henninger do some research into their history and the Syracuse City School District’s history, and they told us that there have been no other Black valedictorians in Henninger’s high school’s history,” Jackson told Because of Them We Can in an exclusive interview.

“It was surprising,” Jackson continued, as she spoke to Spectrum Local News reporters about her historic moment. “I honestly didn’t know that there [hadn’t] been any African American valedictorians in the past. So it was a shock to all of us…I actually got letters from an elementary school, and some third graders wrote letters about me, saying they want to be just like me when they grow up. So it’s just inspirational.”

While in school, Jackson was not only dedicated to her studies, she was very active in extra curricular activities as well. The well-rounded scholar participated in in cross country and track for all four years and also was a member of the Henninger band where she played the flute. In addition to her studies and extracurricular activities, Jackson also made sure to stay involved in her community. She made time to participate in Community-Wide Dialogue, a group that helped her learn more about social issues.

In acknowledgement of her academic achievements, received a full scholarship to the prestigious Wellesley College, where she will be pursuing a career in journalism.

Congratulations, Toryana! We cannot wait to see what the future has in store.